The inflammation of lower intestine gives rise to the problem of ulcerative colitis. This problem is in the category of long term conditions that cause colons and ulcers and further leads to pain and blood while passing the stools. This affects the rectum of the person resulting in various symptoms and problems that the person has to face during that period when this problem flares up.

The symptoms eventually grow and can lead to severe pain. It can cause irritation and swelling. It is also referred to as inflammatory bowel diseases.

Let’s discuss about the causes and symptoms of this particular problem.

Causes of ulcerative colitis flares up

So these were some of the causes of ulcerative colitis flare, now let’s discuss the symptoms of this particular problem.

We know that problem of ulcerative colitis is incurable except for some treatments that may be helpful in reducing the symptoms and suppressing the problem for some time. But if we take good care of our diet and try some of the natural home remedies, for sure the symptoms can be avoided and we can also eliminate this problem.

But as we know that diet and stress are the root cause of this particular problems so these two things need immediate attention.

Let’s discuss about the diet that is to be followed by the patients suffering from ulcerative colitis, not only people suffering from this particular problem but others can also take this in order to maintain a healthy life style and prevent this problem from happening.

Lets discuss about some important food items that must be added to the diet of an ulcerative colitis patient especially who notice flare in their symptoms.

Apart from this there are some home remedies that are suggested to the patients whose symptoms continuously ‘flare up.

Here are some of the best home remedies. 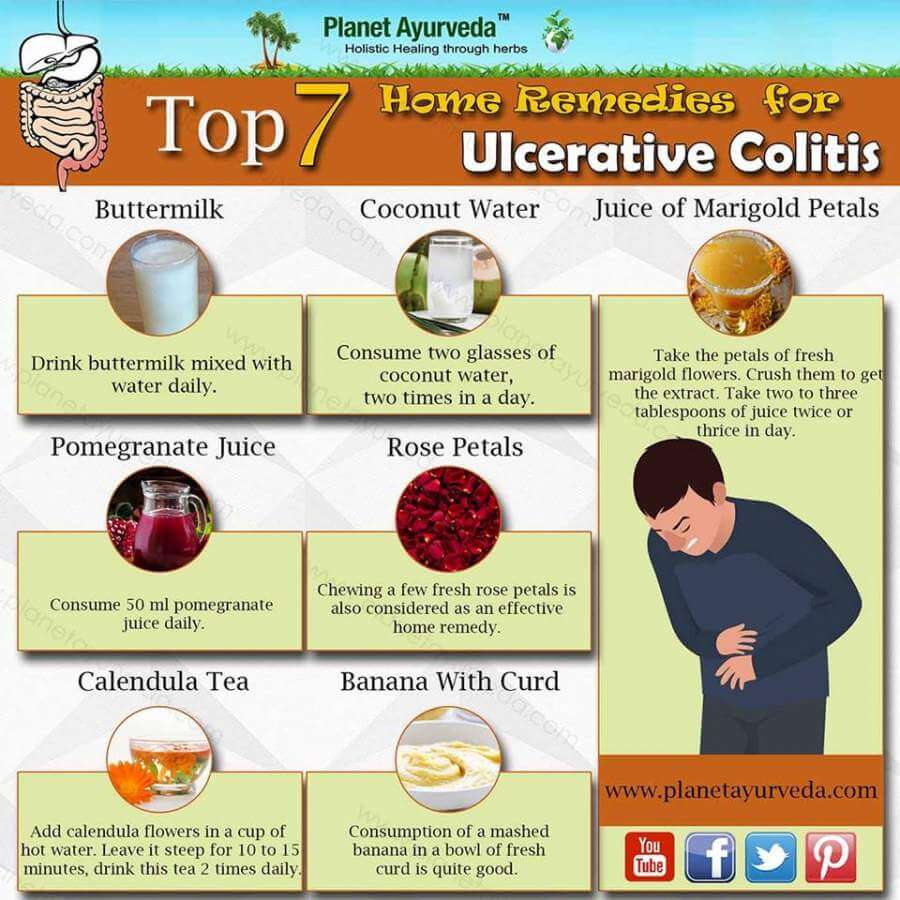 Plenty of liquids: the patients of ulcerative colitis are advised to consume plenty of water. Not only water, they are suggested to take liquid diet as well. More fluid intake is considered to be beneficial for curing the symptoms of this particular problem.

It can be made as:

This is an awesome way to get rid of this particular problem. However there are many other ways but it is suggested to not to take it on an empty stomach.

Turmeric milk is also considered helpful in reducing the symptoms of ulcerative colitis.

Boswellia: boswellia is the herb that has a lot of properties that is helpful in the problem of ulcerative colitis. People taking this herb have tremendously improved.
But excessive intake is considered to be harmful so, it should always be taken under doctor’s supervision.

Husk: husk is the outer shell of psyllium seed. Husk powder is considered beneficial for this particular problem as it is a rich source of fiber and absorbs toxins from the body.

This can be used in the following way:

Olive oil: Olive oil is the most efficient home remedies for ulcerative colitis. Having a high content of mono-unsaturated fats, olive oil also has immunomodulatory along with anti-inflammatory properties that is effective for both mild and moderate cases.

Consume 2-3 tablespoons of extra virgin olive oil every day for relief from this problem.

Author Bio:
DR. Vikram Chauhan, MD – AYURVEDA is an expert Ayurvedic practitioner based in Chandigarh, India and doing his practice in Mohali, India. He is spreading the knowledge of Ayurveda Ancient healing treatment, not only in India but also abroad. He is the CEO and Founder of Planet Ayurveda Products, Planet Ayurveda Clinic and Krishna Herbal Company.