Physical activity is good for our bodies, and it has many other benefits as well, such as reduced stress and better mood. Furthermore, travel expands our horizons and is good for our minds, and before you ask, airport layovers and hotel room service do not count as “travel.” Finally, being outdoors is good for our emotions, as we discover anew that there is life outside our cubicles. So, why not combine all three of these elements and take an extended walking/hiking tour of a place you may have heard about or passed on an interstate but have never truly experienced? 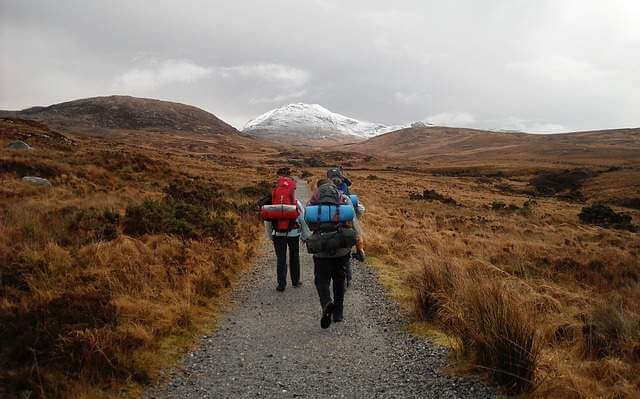 For about a thousand years, Christians have walked from southern France to Santiago de Compostela, which is on the northwest coast of Spain and the traditional burial place of St. James. But for many, if not most, modern pilgrims, the camino has little or nothing to do with religion.

The 800km trip provides plenty of physical activity, especially since a good bit of the journey is through the Pyrenees Mountains. As for cultural experience, Basque Spain is a mixture of nations (France and Spain) as well as a mixture of religions (though mostly Christian now, the area was predominantly Muslim for the better part of a century). As for outdoor beauty, this experience takes place in what is essentially an unspoiled area of Europe.

If you time things right, you may even be able to run with the bulls in Pamplona. If this possibility tickles your fancy, an extra pair of walking sticks might be in order.

At over 500,000 acres, the traditional homeland of the Cherokee Indians is by far the largest wilderness area in the eastern United States. More importantly for our purposes, there are about 900 miles of hiking/walking trails in this national park that was established in 1934.

While there is plenty of physical activity and a chance to see log cabins and other dwellings that date back two hundred years, the high point of these walking trips, at least for most people, is the natural beauty that includes:

There are also numerous waterfalls and the misty, bluish-gray smoke that envelops some of the higher peaks and gives these mountains their name.

This group of five fishing villages nestled on the Mediterranean coast combines gently pounding surf, majestic mountains, and quaint Italian street life. On of the reasons this area is a UNESCO World Heritage Site is that the towns are accessible only by boat, rail, or foot. There is no vehicle traffic at all, so life in 2017 is more like life in 1817. Since these towns are on the Italian Riviera, there is plenty of wine, seafood, and pasta.

As for walking, there are narrow village streets and terraced walkways along the mountains that lead to rock promontories. There is also an opportunity to take in everyday Italian culture, a chance that tourists in Rome or Milan do not often get. And as for emotional fortification, just take a look for yourself.

The area outside Canada’s seventh-largest metropolitan area includes sites like soaring eagles and granite cliffs that are one-of-a-kind anywhere but in Quebec, where they are commonplace occurrences. During your hike, there is no shortage of natural beauty in the winter, summer, or fall. Plus, the Saguenay National Park is another UNESCO World Heritage Site. The city itself is worth a walking tour, with its combination of modern skyscrapers and stunning 18th century structures.

Much like in northern Spain, this area has a unique cross-cultural appeal, as French and English families who once fought so bitterly over these lands now live in relative peace.

If you’ve never been to a cloud forest, and most people probably have never even heard of a cloud forest, Costa Rica should be on your bucket list. These are rain forests that are so high in the mountains that they are enveloped in clouds most of the time. Plus, the rope bridges suspended between these trees are not to be believed. Neither is the tranquil silence, punctuated only occasionally by a bird or howler monkey.

Since you’ll most likely spend lots of time with the locals to find your way around, there are lots of chances for cultural interaction. Plus, from the volcanoes to the rain forests to the waterfalls, there are a lot of unique natural experiences here.

Although the 2,000-plus miles from Independence, Missouri to Oregon City, Oregon is probably too long of a walk, the Oregon Trail is a great way to connect with our collective past. The Trail also contains more than 100 historic sites. One popular walking tour starts at the base of Mount Hood and winds through the nearby mountains. Finally, the Trail is a good place to immerse oneself in Native American culture, because these people were in the area far, far longer than European migrants.

Since it is a trail after all, much of this route is easy to traverse on foot, while more adventurous soles can navigate the mountains closer to the Pacific coast. Environmentally, the vastness of the landscape is sometimes overwhelming even today. Can you imagine what a family from Chicago or St. Louis who had probably never seen opens sky must have thought when they first glimpsed Chimney Rock?

Perhaps the best walking tour of all is the one around your own neighborhood. In the last few years, many areas have made concerted efforts to become more pedestrian-friendly, with things like more green areas and wider sidewalks. Cultural exchange opportunities abound as well, because in many parts of the United States, no one ethnic group composes more than about a third of the population. Finally, there are emotional benefits as well, because the connections you make aren’t left behind.