Type 2 diabetes refers to a condition wherein the body finds it hard to metabolize glucose present in the blood. This happens mainly because of two factors – the body becomes resistant to insulin or there is decrease in insulin release, which in turn leads to spike in blood glucose levels. This surge in blood sugar levels in the body, if left untreated for prolonged period, may result in development of hyperglycaemia in which the blood flow to skin is significantly reduced. Poor blood circulation in skin causes damage to blood vessels and nerves, and also leads to deterioration of skin collagen which manifests in the form of a hoard of skin disorders. This explains why skin problems are considered as one of the first major symptoms of type 2 diabetes.

Another factor that contributes to skin disorders in people with type 2 diabetes is dehydration. High blood sugar levels in the body gives rise to loss of fluids making the body vulnerable to dehydration. If this fluid loss is not curbed by sufficient intake of liquids, the skin loses its moisture and becomes dry. Severely dry skin is more prone to getting cracked and injured and therefore carries a higher risk of contracting skin infections resulting in skin disorders. For this reason, people with diabetes need to pay special attention to the health of their skin and get any changes on skin they observe diagnosed by a physician or a dermatologist. Here is a list of some common skin conditions in people with type 2 diabetes. 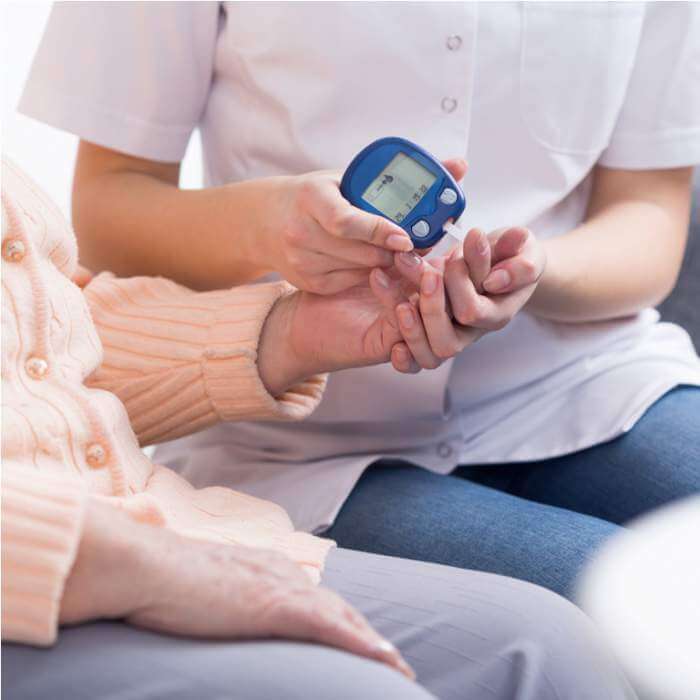 A strong correlation has been observed in people with type 2 diabetes and Psoriasis. An autoimmune inflammatory skin disorder, Psoriasis is marked by dry scaly itchy red rashes on skin surface which are caused due to overproduction of skin cells. Type 2 diabetics are at a greater risk of developing psoriasis owing to a common genetic predisposition found in people suffering from diabetes and psoriasis.

Skin tags are painless non- cancerous raised skin coloured growths hanging from skin surface. They occur mostly due to friction caused on skin surface. When there is friction, collagen and blood vessels ten to get trapped inside thick areas of skin like skin creases and folds resulting in formation of tags. These bumps have no medical implications, but most people choose to get them removed for aesthetic purposes. One reason that gives rise to the appearance of skin tags is too much insulin in the body which puts people with type 2 diabetes more at risk of developing skin tags.

This skin condition affects skin tissues resulting in discolored and thickened skin at the back of neck and upper back and may spread to other body parts as well, if not brought under control. Studies have revealed a greater incidence of people with type 2 diabetes suffering from this rare skin condition.

Also known as Bullosis Diabeticorum, diabetic blisters are painless lesions on skin surface that look similar to burn blisters. These blisters may contain fluid and have a tendency to itch. People who have suffered from uncontrolled type 2 diabetes for a long period of time are prone to developing diabetic blisters on fingers, hands, feet, toes and legs. Although these blisters heal on their own and do not require immediate treatment, bringing blood glucose levels under control helps speed up the healing process of these blisters. Furthermore, most type 2 diabetics suffer from Candida Abicans, a fungal infection which again puts them at a higher risk of getting diabetic blisters.

Disseminated Granuloma Annulare is a benign skin condition affecting people with type 2 diabetes. This skin disorder appears in the form of mildly pruritic arch shaped rashes on the skin. These rashes mostly appear on fingers, ears, chest, abdomen, face, scalp, hands, soles of feet and skin folds. Maintaining blood glucose levels within healthy range is the only way to quicken the healing of these rashes.

Also referred to as Shin Spots, Diabetic Dermopathy is a skin condition characterized by indented lesions on lower extremities (shins). These lesions appear in the form of hyperpigmented scaly round patches on the skin. In rare cases, these lesions may itch, become sore or even hurt. They usually appear on areas inflicted with injury and mostly affect people with long term untreated type 2 diabetes. Though harmless in nature, these patches need to be carefully diagnosed by a physician to be sure of the condition. Like most other skin disorders associated with diabetes, Diabetic Dermopathy can be treated by maintaining healthy glucose levels in the blood.

Necrobiosis LipoidicaDiabeticorum (NLD) is a rare form of skin disorder that affects patients with type 2 diabetes. This condition mainly arises due to deterioration of collagen and inflammation within skin cells that takes place in diabetics. Women, in general are more likely to be affected by this disorder. NLD appears as shiny patches or spots which may be red to brown in colour and have a pale center. These spots often turn into open sores and take a lot of time to heal. These spots are necrotizing when they appear in groups as the nerves get damaged. NLD is most often confused with granuloma annulare owing to a similarity in the symptoms. A biopsy of skin tissue is conducted to make a correct diagnosis of NLD. This condition can be treated with corticosteriods and cortisone creams besides taking measures to control blood sugar levels.

Acanthosis Nigricans is described as a condition wherein thickened dark velvety patches appear on the neck, armpits and other skin folds. These patches become noticeable over a span of few months as the progression of this condition is slow. When the patches become prominent they are dark brown to black in colour as if your skin is dyed. Acanthosis Nigricans affects people with diabetes owing to high insulin levels in their body. This skin condition is often treated with topical vitamin D, salicylic acid and alphahydroxy acids. Bringing insulin levels under control is crucial to fully treat this skin disorder especially in people with type 2 diabetes.

Harvey lives with his wife, daughter, and two golden retrievers in one of the many stone houses in Stamford, UK. He is a freelance writer and a content strategist with many top health and beauty product companies like Tagband: makers one of the most popular skin tag removal devices in UK. When he is not working he can be found sipping coffee in one of the cafe’s overlooking river Welland.